An anniversary of 150 years does not occur every day. Nevertheless, the protestants of the Geuzenhoek in Horebeke will celebrate an exceptional event next Sunday, OCTOBER 16. After centuries of persecution, they were allowed to practice their faith freely in the early nineteenth century. Still, it would take until 1872 before a full-fledged church was built on Korsele. Its construction was financed by an early form of crowdfunding and donations from all quarters. And so a neo-Gothic building arose next to the cemetery, which has since been known as the “new church”.

The program of the anniversary celebration foresees a thanksgiving service at 10 a.m. This is followed by a festive celebration at 2.30 pm with a historical retrospective, music, evocations, memories and speeches. Followed by a reception and free visit to the temporary exhibition in the protestant museum. 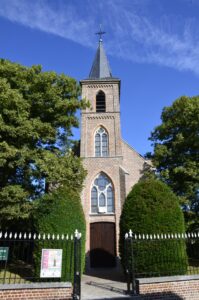