Red de Godsbergkouter vzw is optimistic about its chances of success. 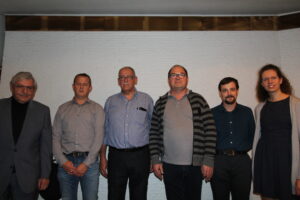 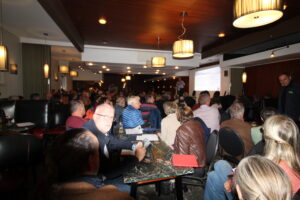 Schendelbeke/Ophasselt. The action committee Save the Godsbergkouter is preparing for years of procedural battle. ‘There will be no barracks on the Godsbergkouter’, it sounds resolutely. In order to be able to file legal resistance, the action committee has turned into a non-profit organization. The newly established non-profit organization is also looking for supporters, financial resources and know-how. With regard to the latter, a consultation round is already underway. Filip De Bodt of the climate movement Climaxi has already become involved. He has gained a lot of experience in connection with the many years of procedural battle against the straightening of the regional road N42. “No military complex in our backyard,” it sounds.

On Thursday evening there was an information evening in the De Kat room in Ophasselt about the non-profit organization Red de Godsbergkouter. About 130 sympathizers and interested parties showed up. The members of the action committee have not been idle and have meanwhile visited a number of cabinets to take stock. For example, Ludivine Dedonder (PS) – Minister of National Defense – was looking forward to a visit from the committee members. It is no secret – according to Johan Verbruggen – that as many French speakers as possible will be recruited for the barracks in Schendelbeke. Combat troops with heavy armored vehicles enter the barracks. ‘A number of people will be recruited from here, but the vast majority will come from outside our region’, Johan Verbruggen puts the finishing touches on the ‘i’.

Budgetary slippage
It is remarkable that the financing of the barracks will have to be entered in the defense envelope. ‘We will be happy to follow up on this, because nothing has been registered yet’, says Herman Herpelinckx. ‘Obviously there are still choices in East Flanders, but they are less suitable in the PS’s thinking.’ The cost of the barracks is estimated at 280 million euros, ‘probably a gross underestimate’, according to Herman Herpelinckx. Of course, inflation alone will drive up the cost of the barracks.

Then there are the constraints of budgetary and political reality. The exploding energy crisis is putting such a strain on the budget that the question arises as to whether there is still room for such frivolities. The Flemish Region, the province and the city of Geraardsbergen will also have to intervene, for example for the reconstruction of roads with additional infrastructure and possible expropriations. According to Herman Herpelinckx, this is estimated at at least 100 million euros.

Then there is the political agenda. Within two years there will be federal, regional and municipal elections. After 2024, there is a chance that another political constellation will present itself where the construction of a new barracks is no longer a political priority.

No Flemish cents for a French-speaking barracks
The members of the action committee will soon have a meeting with the Flemish Minister for the Environment Zuhal Demir. It is no secret that Minister Demir is not in favor of a PS-signature barracks on Flemish soil, on which Flemish cents have to be spent. Moreover, the various governments in this country will have other financial problems than the establishment of very expensive barracks. According to Herman Herpelinckx it is clear that ‘this manipulated decision in Geraardsbergen no longer has support.

Filip De Bodt of the climate movement Climaxi explained how the procedure for building a barracks works and what the options are for responding, submitting objections and objections and litigating where necessary. “You’re going to have an avalanche of lawsuits all over you. It is important that you do not give up and that you know what you have to be alert to,’ says De Bodt. ‘If you persist, there is a chance that you will win the procedural battle,’ says the contested activist.

Ukraine
Jan Hanssens concluded the evening with an explanation of how the non-profit organization will organize itself in the coming years in order to win the procedural battle. Jan Hanssens likes to compare it with the conflict between Ukraine and Russia. ‘The aggressor city of Geraardsbergen has seized our open space. The aggressor city of Geraardsbergen has deprived the peace and quality of life of the people. Well, we are going to fight for it’, Jan Hanssens concluded the evening.

Surprisingly, not a single councilor was present. Dirk Van der Maelen (Vooruit) was represented with a delegation. Luc Swartebroeckx of Weerbaar Geraardsbergen was also present. The committee members of Red de Godsbergkouter were short of words to make it clear that they are politically independent and that the members will not be ‘tempted’ to figure on a party list.

The economic impact of barracks on the environment should not be exaggerated. Also read:

Johan Verbruggen: ‘The article in the city magazine about the arrival of the barracks is shockingly one-sided.’