The Noordlaan, Zuidlaan and Hooglaan remain dangerous terrain for cyclists when we see how many acorns there are on the bicycle paths in Zwalm. This morning a lady fell along Noordlaan as she got out of her car. The acorns are like a marble run. The N415 is also a serious test for cyclists and it is difficult to speak of a comfortable ride here. A bike with wider tires does feel safer than a bike with thin tires. Some cyclists avoid the Noorlaan-Zuidlaan axis themselves to avoid the risk of a crash.

It is difficult to speak of a comfortable cycle path here. On the other hand, hundreds of thousands of euros are spent on bicycle paths that are already there such as the Sint–Andriessteenweg in Strijpen, the center of Lierde along the N8 and soon along the N415 in Brakel between the intersection De Ooievaar and Heuvelgem. Here, cycle paths that are suitable for use have been or will be broken up in the future to be replaced by asphalt. It is a matter of embellishing the statistics that so many kilometers of bicycle path have been built.

On the other hand, people have been working for 20 years to provide a piece of bicycle path along the Kasteeldreef near a school in St.-Maria-Oudenhove (‘t Kasteelke) where the students have to ride on the roadway. Where are the priorities? 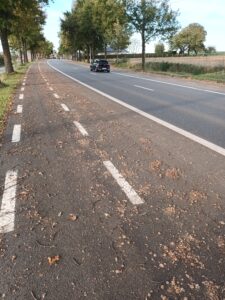 Day of the youth movement in Brakel

Day of the youth movement in Brakel