Water problems were addressed in Rozebeke

A whole series of interventions were once again carried out in Zwalm-Rozebeke to tackle the water problem. “A few months ago, part of Rekelberg was already being renovated. Now it was up to the part that connects the village with the Hooglaan,” explains alderman of public works Peter Van Den Haute (N-VA). Adjustments were made in various places along the entire slope. In the past it was often the case that the water from the higher farmlands flowed down unhindered via the road, causing even more flooding. Extra measures have now been taken at the bottom, in the middle and above: extra sewer gullies and drains must drain the water more quickly through the sewerage system. We try to absorb the largest body of water above. A section of the old canal was also reopened there and an extra buffer with retaining wall was built at the deepest point.” A recent heavy thunderstorm was the first test and everything appeared to be working fine. “A big compliment to the people of our technical service who carried out the work completely in-house. As alderman for public works, I consider myself incredibly fortunate that I can count on such people,” concludes Van Den Haute. 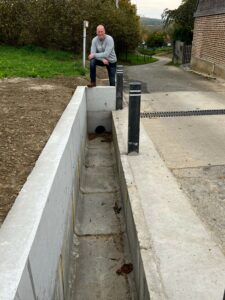