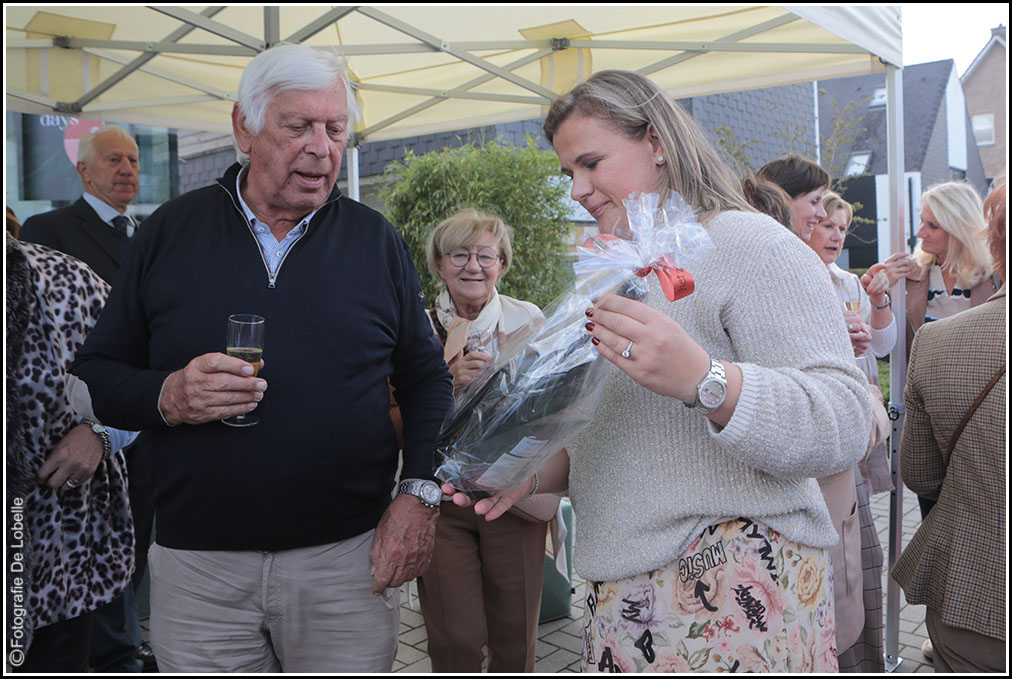 In style and class. This is how one can describe the thank-you party that Evelyne Minnaert organized for her parents Roland and Josée. With a neat reception, with lots of bubbles, very good culinary snacks and conviviality, there was immediately a very festive atmosphere at Apotheek Minnaert in Stationsstraat 5 in Scheldewindeke. A heartfelt compliment to Evelyne who paid a nice tribute to her completely surprised parents Roland and Josée. Her thoughts also went out to ‘pioneer’ grandfather Leo Minnaert, who founded Pharmacy Minnaert in 1943. It shows great respect for the past. ‘Although I never knew him, the figure of ancestor Leo has always captured my imagination’, Evelyne muses. ‘I am proud of my roots, I want to continue the rich pharmacy history of the Minnaerts’, the ever-smiling Evelyne indicates. Who knows, he might deserve a portrait in the pharmacy. The memory must live. 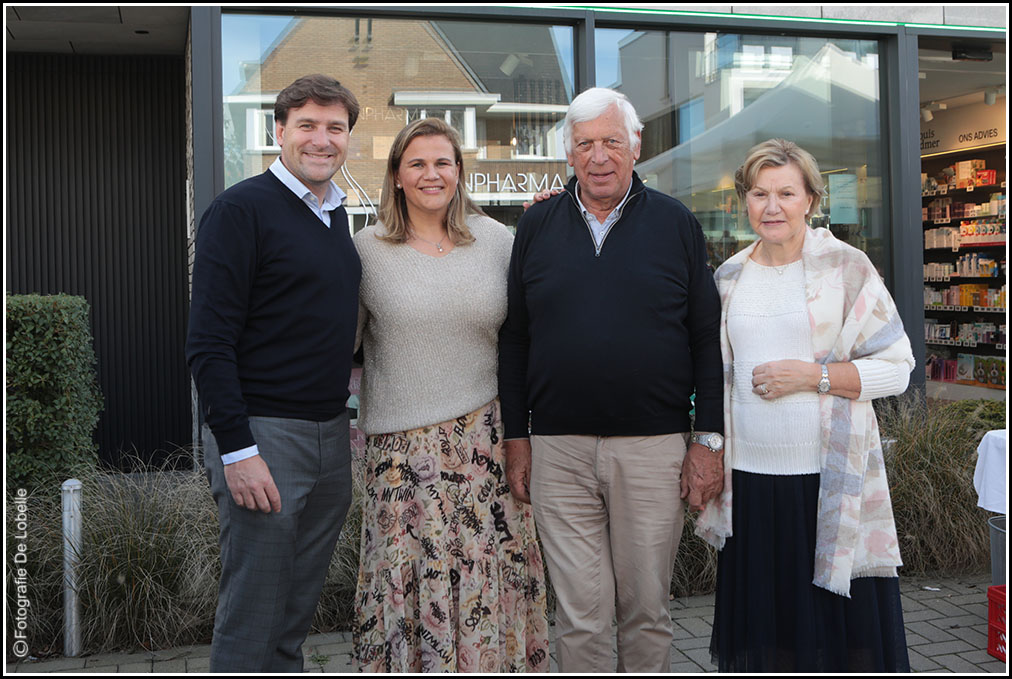 Evelyne Minnaert rolled up her sleeves and forged the plan to build a real surprise party for her parents in five days. My parents have been married for over 50 years now (they married in 1970, mvdv), because of corona we couldn’t celebrate the ‘golden wedding’. My father was only now infected by corona for the first time and had a real post corona dip, I wanted to brighten him up again, hence the party. I am also very grateful to my mom for all the support and the extra hours of help, even though her own pharmacy in Bottelare has long been sold. I thank them for their many years of loyal service at the Minnaert pharmacy, which has now been in existence for 79 years. We are planning to celebrate the 80th (the oak!) anniversary of the pharmacy next year in May 2023′, says Evelyne. With this special anniversary in 2023, the banner of ‘Apotheek Minnaert’ will once again be honored. 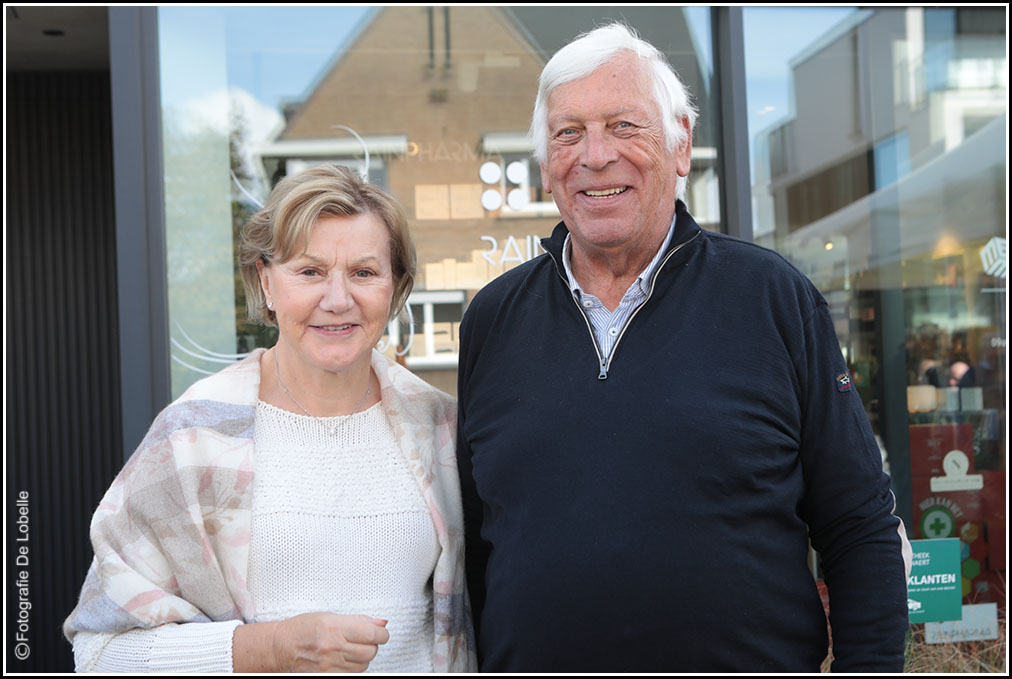 It all starts in 1943. Leo Minnaert starts a pharmacy in Scheldewindeke. He lived for his pharmacy and his village. Leo Minnaert quickly built up a solid reputation. A man whom everyone consulted. A beloved figure in Scheldewindeke. He was a member of various organizations in the municipality and was a member of the local board of the Red Cross. After his sudden death in his pharmacy on December 22, 1974 (he was barely 58 years old), Evelyne’s parents took over the pharmacy. ‘My parents kept the pharmacy alive for more than 40 years until I had enough diplomas to move to Scheldewindeke city, after a first career as an industrial pharmacist at Pfizer and Medtronic,’ says Evelyne. Since 2012, Evelyne has taken over pharmacy Minnaert – Van de Velde and of course kept the name and shortened it again. The blood has continued to flow through the same pharmacy with Evelyne for 79 years now. After the second generation, Pharmacy Minnaert got the ideal successor with Evelyne. A new generation automatically also means ‘modern’ times. Evelyne puts her own accents. She moved the pharmacy from Stationsstraat 27 to number 5 in 2014, and with her feminine touch, good taste and because she knows the industry through and through, the pharmacy is revived. She’s doing really well. 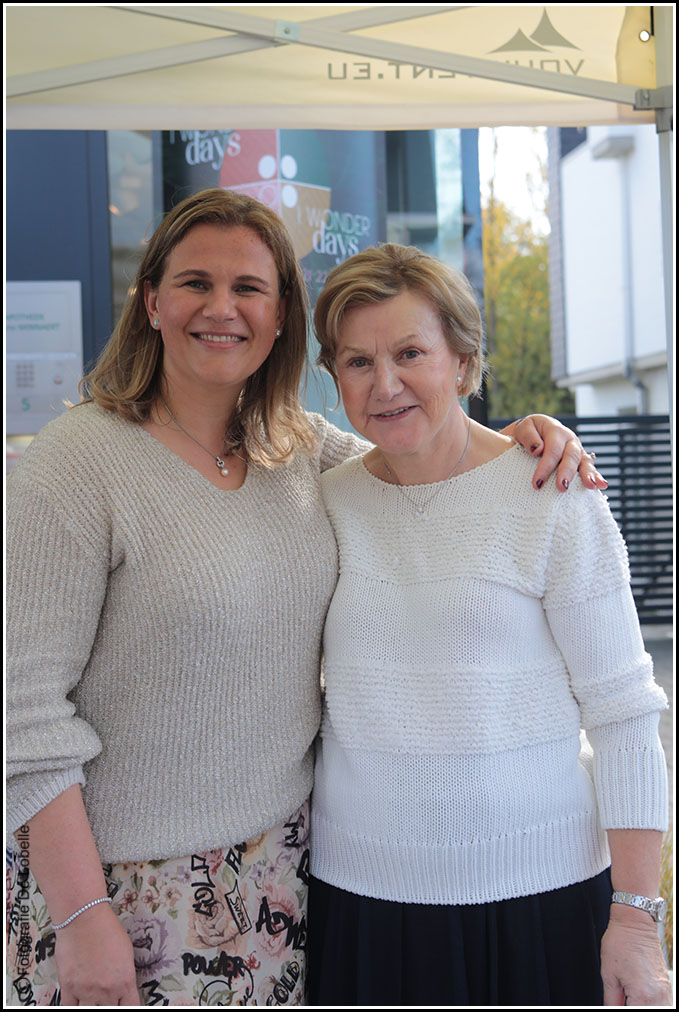 When you enter Pharmacy Minnaert you will find yourself in a completely hypermodern contemporary trendy interior. You can even find them on facebook and instagram. There is now a spacious parking lot and a medication robot to properly manage the wide range. You will always be welcomed in a friendly and attentive manner by Nancy, Marieke and Evelyne herself. Customer-friendliness, an asset and constant in Pharmacy Minnaert. Evelyne has been commended for paying tribute to her grandfather and parents. The many congratulations apparently pleased her. Pharmacy Minnaert was an atmospheric place on Saturday October 22, 2022. A very successful party. (marcel van de pond, photos Danny De Lobelle) 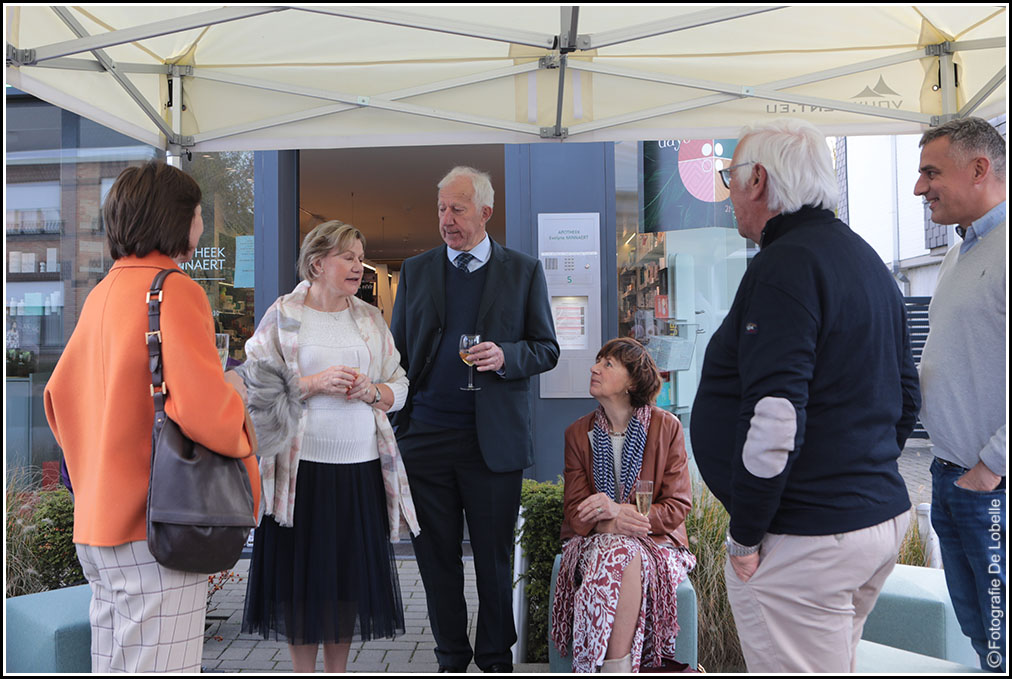 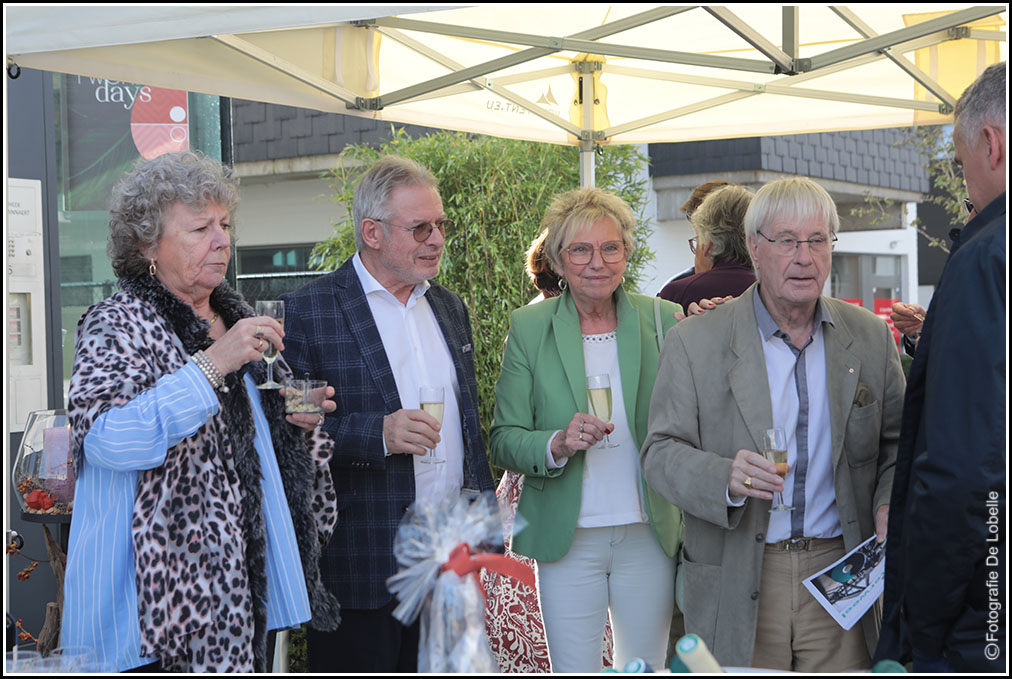 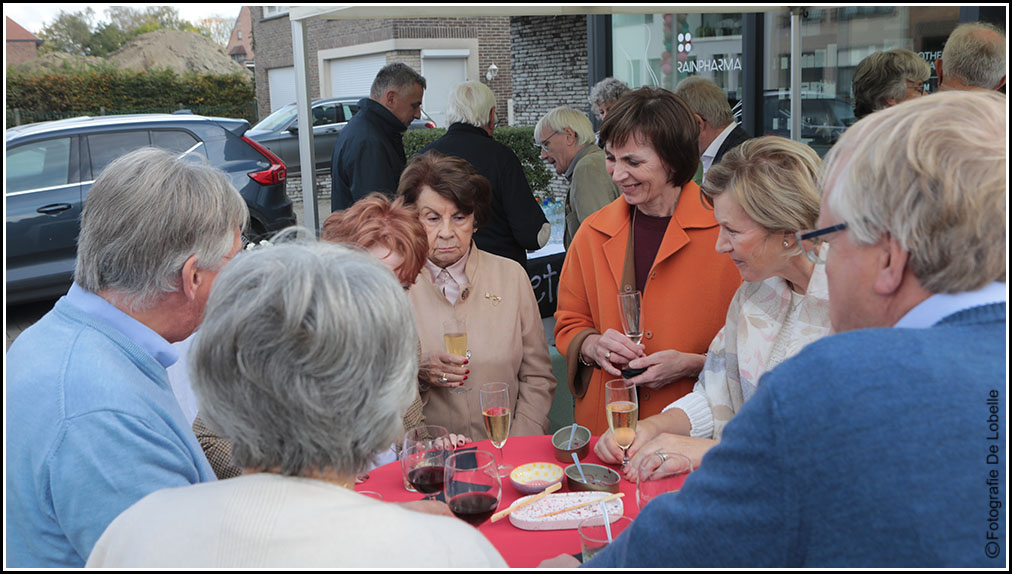 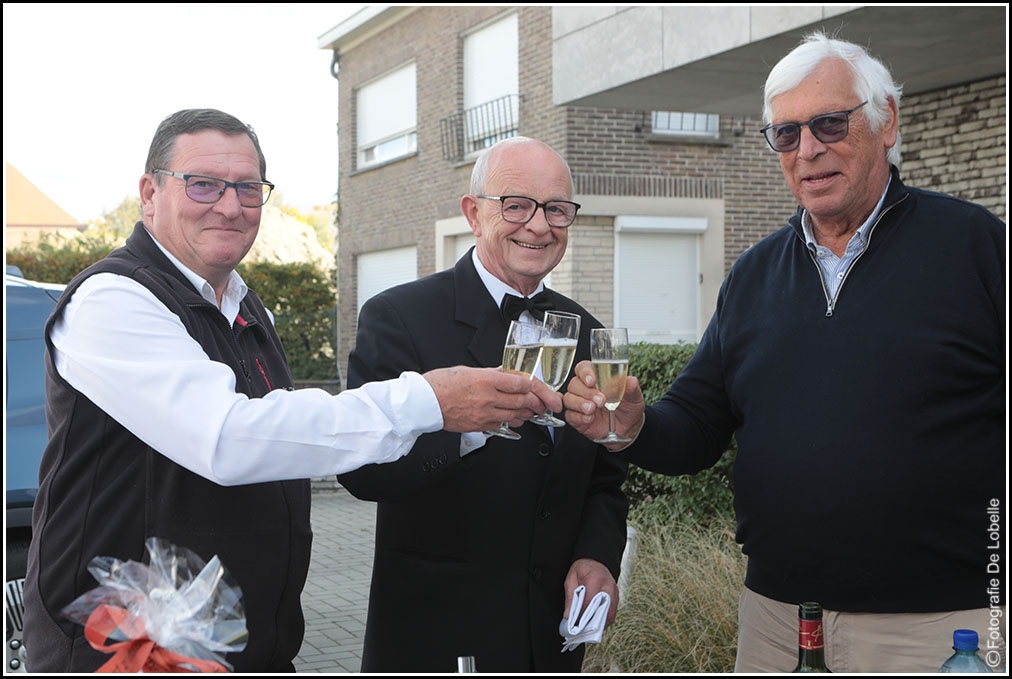 Participate in a poem contest with the theme ‘Friendship’

Participate in a poem contest with the theme 'Friendship'