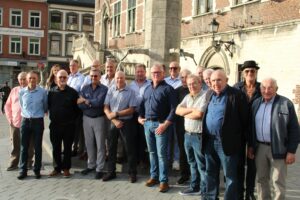 Geraardsbergen. Jette Sportief was a successful cycling team in our region and a breeding ground for young cycling talent. The cycling team won the prizes for years. Many of them swarmed out to other teams. Former cyclist Stéphan Bourlau also rode for the team. Hilaire Van der Schueren was sports director for a while. A reunion was organized again on Saturday 29 October to dust off the old glory.

Jette Sportief was a cycling club from Brabant. The club saw the light of day in 1966 and closed down in 1998. During that period Herman De Meutter was chairman of this leading club. The head office of this club was in Jette, but with the arrival of sports director/board member Hilaire Van der Schueren, from Atembeke, the activities moved to our region.

Jette Sportief was a breeding ground for a lot of talent. The team produced several provincial champions, including Adrien De Leeuw, Freddy Moermans, Peter De Neef, Marc Van den Brande… The Jette Sportief riders combined their victories in foreign rounds – such as the Tour of Mallorca and the Tour of Chile.

The apotheosis was undoubtedly the Belgian title in the U23 Championships of Marc Sergeant in 1981 and the Belgian titles on the track won by Steven Deneef. Steven is currently sports director at Wanty-Groupe Goubert. Jette Sportief also had a number of ladies in their ranks, including Ellen Plas who won several Belgian titles on the slopes. A lot of Jette riders made the switch to the pros with regional riders such as Dirk Durant, Rudi Van der Haegen and Willy De Smet.

In October of 2020, Stéphan Bourlau started a Facebook group under the name Jette Sportief Forever. Stéphan himself was part of the team between 1977 and 1983.