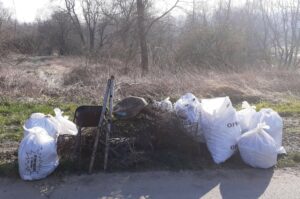 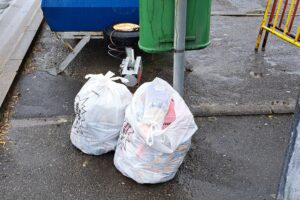 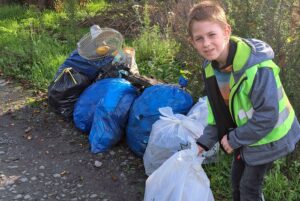 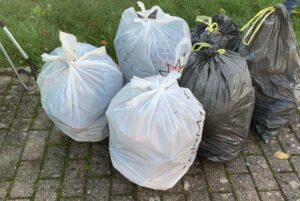 Geraardsbergen. The Giesbaarg litter hunters are a group of volunteers who regularly go out to keep the streets, squares, paths, streams and much more clean. The driving force behind the initiative is Jimmy De Kock (39). He hates illegal dumping and litter. Jimmy is a thoroughbred nature lover and idealist. Clearing, recycling and sorting are just about the core concepts of his life. His children and his wife are also present. Sometimes the members of the Giesbaarg litter hunters are confronted with aggression. For example, Jimmy’s wife was recently headbutted by a young guy who rudely dumped a bag of garbage.

Jimmy comes from Idegem and works at Natuurpunt. Before that he was a bread and pastry baker. He is married and has four children. He regularly sets out with his family and some volunteers along Flemish roads to collect and evacuate litter. Jimmy lived in Ninove for a while and joined the Ninove litter hunters. ‘Cleaning up illegal landfill and litter is completely voluntary and free. Sympathizers and members go out individually. Once a month there is a group clean-up’, says Jimmy. Now that the passionate idealist lives in the Oudenberg city, he has founded the Giesbaarg litter hunters, a motley crew whose noses are in the same direction. ‘We hope that soon every borough will have a few permanent litter hunters to stop the litter.’

17 cases of litter and two fly dumping
Sunday 30 October there was a group clearing in Schendelbeke. ‘In two hours we collected 17 bags of litter with twelve people in Schendelbeke and cleared two fly dumping grounds.’ Jimmy is a nature lover and wants the environment to be immaculate. One day a month he sets out to give the Geraardsberg area a major clean-up. Jimmy knows how to organize himself well. He received a subsidy from Natuurpunt and from the city of Geraardsbergen he received litter sticks and bags. 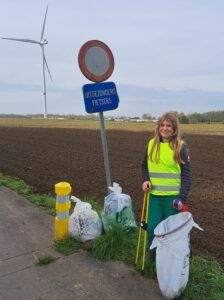 Jimmy is a young father with young children, but don’t worry: ‘The two eldest voluntarily join the operation. My wife is also there and the youngest goes along to soak up the atmosphere.’ That Jimmy is very motivated was also apparent during our appointment. Before and after our meeting, Jimmy and his son collected quite a bit of litter on the Market in Geraardsbergen.

Fighting a losing battle?
Don’t the Giesbaarg litter hunters fight against the beer quay? ‘In the places where we regularly go, we see that there is less illegal dumping, but in the center of Geraardsbergen it is sometimes a struggle. We are currently seeing an increase in litter. We should certainly not give up, because in some places the situation is improving. Fortunately, the corona period is over, because the mouth masks we had to pick up from the streams, along the road or from the roadsides cannot be counted. A lot of waste is also dumped in and around the clothing containers’, says Jimmy.

According to Jimmy, the cause of the increase in litter and illegal dumping must be sought in the rising poverty in the city and the relatively expensive diftar system, which causes people to look for a ‘wrong’ way out in illegal dumping. ‘That ranges from small household waste to fans, mattresses, slatted bases and construction waste. The waste is sometimes dumped in streams and nature reserves. Six months ago, we collected more than 22 items of litter at the Boelaremeersen in the Dender Valley. The problem is that the following week there were again more than twenty bags of waste.’

According to Jimmy, the city of Geraardsbergen should respond more quickly by deploying more covert landfill cameras. The Giesbaarg litter hunters also speak to people about their behaviour. ‘Obviously we are not there to fine or punish people, but we always try to start a conversation.’ 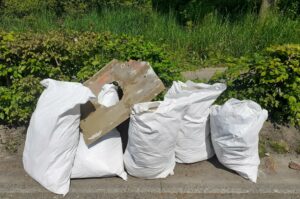 headbutt
No matter how good the intentions of the Giesbaarg litter hunters, they are sometimes confronted with aggression. ‘A few months ago my wife was treated very aggressively in our own street. Opposite our door there is a playground, where dirt is regularly left behind. At one point we were cleaning up the playground. My wife wanted to take another picture of a mattress that was left there. A boy walked up and bluntly threw a bag of dirt on the floor and noted that no pictures are allowed. It sparked a heated discussion. The young man freaked out and gave my wife a headbutt. The police had to be called in. My wife did not dare to go out alone for three weeks because this young fellow was always around to express his displeasure. In the meantime, the quarrel has been settled,” says Jimmy.

‘Another time we were clearing in Ninove when at one point a car drove by. The driver didn’t think it was better to throw an empty can through the window. The can hit the back of one of my kids’ head. Fortunately, the employees of the Giesbaarg litter hunters receive much more positive than negative reactions. 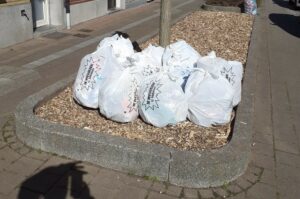 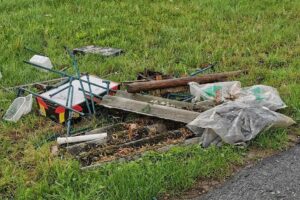