With Angel (47) from Hungary, poverty and unemployment become even more multicultural 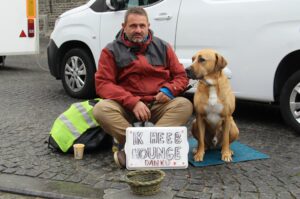 Geraardsbergen. Monday 31 October we will meet Angel (47) at the Market in Geraardsbergen. Angel comes from Hungary. He says he has left his country because he has no future there. He hopes to build a new life here. But if we look at the statistics of Geraardsbergen’s Local Integration Scan, his maps are certainly not good. The chances of Angel ending up in poverty, unemployment and social isolation are high. The numbers are sobering.

Monday 31 October we will meet Angel (47) at the Market in Geraardsbergen. Angel got a lift from a friend. He has no family or acquaintances in Geraardsbergen where he can go. Angel speaks Hungarian and some English. He has not yet made an appointment with the OCMW. How he sees the future is not immediately clear.

The statistics
The Local Integration Scan shows that there are 2023 foreign nationals living in Geraardsbergen, while 5,849 residents are of foreign origin. That is about 17% of the total population. The number of

foreign nationals has steadily increased in recent years (see graph). For the Flemish Region this is 25%. There are currently 101 different nationalities living in Geraardsbergen. This makes our city one of the leading groups in the Flemish Region.

Poverty among non-EU residents is up to 3 times higher in a family with very low work intensity. The vast majority of living wages are paid to non-EU residents. The number of children born in an underprivileged family is 20.5%. The Flemish average is no higher than 12.7%. The city of Geraardsbergen should go a step further with regard to the share of staff of foreign origin in the municipal workforce. 10.4% of municipal workers are of foreign origin, while the Flemish average is 13.4%.

Munte: Reveil at the municipal cemetery