Couple gets five years in prison for intentional arson 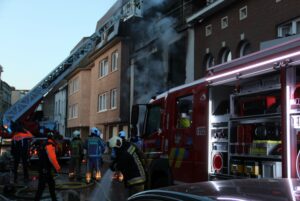 Geraardsbergen. The couple who deliberately set fire to their house in Penintenstraat on April 22, 2021, was sentenced by the correctional court in Oudenaarde to five years in prison.

On April 22, 2021, an explosion occurred in a house in the Penintenstraat around 4 a.m. Then a raging fire broke out. The couple jumped through the window and were seriously injured. The adjacent homes sustained heavy damage.

The correctional court of Oudenaarde ruled in this case that the couple is guilty of ‘deliberate arson of a house at night, resulting in incapacity for work’. The fire in the house was the result of an act of desperation.

The couple was sentenced to five years in prison, with probation suspended. However, the court took into account the condition of the man who suffered brain damage as a result of the fire.

People with questions about life can call the toll-free number 1813, or via www.zelfmoord1813.be.