same. On Wednesday, November 3, around 7:15 PM, Ariane Sterck was brutally hit by a young man at the intersection of Driesstraat and Bareelstraat with her car, who wanted to overtake her on the left. The young man got out, but then ran. The man was at fault for overtaking Ariane where he was not allowed to. The damage to the car is considerable. Ariane is looking for witnesses. 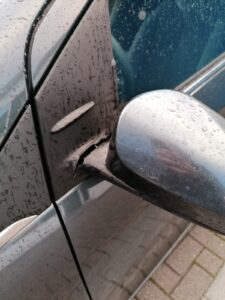 On Wednesday 3 November, Ariane Sterck drove her car in the Driesstraat in the direction of the center of Idegem. She was about to enter Bareelstraat when she was overtaken by a black car on the left. Due to his brusque maneuver he collided with Ariane’s car. The young man hit the left front wing and mirror of her car.

Flight crime
Ariane got out of her car and went to the young man who hit her. He also got out of his car. Ariane Sterck asked him to prepare the insurance papers together, but the man changed his mind, got into his car and drove on. The man was at fault for overtaking Ariane where he was not allowed to. According to the victim, the perpetrator drove over the lock of Idegem in the direction of Grimminge or Onkerzele.

Ariane was shocked, but was left stunned. In the meantime she realizes that things could be worse: ‘Had I turned into Bareelstraat a little earlier, he would have hit the young man in the side with his car, the consequences would have been much greater. I’m still not sure he can get away with it like this.’ The damage to her car is extensive. ‘I have a cost of €3000. If the perpetrator is not found, then I can pay everything out of my own pocket,” the victim said.

The Police arrived on the scene and prepared an official report for a traffic accident with material damage, with hit and run as an aggravating circumstance. Ariane Sterck asks to look out for a black car. Since it was dark and Ariane was too far away, she could only read part of his license plate. His license plate started with 1-VSN…

Anyone who can provide more information can contact Ariane Sterck via her Facebook page or the Geraardsbergen/Lierde police.