Building CM squatted by aggressive junkies who threaten the staff 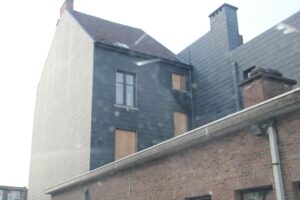 confirms this story, but cannot provide further information in the context of the investigation. The squatters are behaving aggressively and have already intimidated several employees of the Christian Mutuality.

We know from well-informed sources that several junkies have been squatting the building of the Christian Mutuality on the Zakkaai for several months. According to our source, there are eight. “First they broke open the front door. It was repaired several times and eventually barricaded. Then they broke open several windows to get into the building,” said our source. In the meantime, a procedure is underway to evict the tenant and the various junkies, ‘but that could take a long time’.

The squatters are becoming increasingly bold and have broken open a door that gives them access to the offices of the Christian Mutuality. “These junkies are behaving quite aggressively and threaten the employees of the Christian Mutuality,” our source testified. The pressure from the squatters is so great that the employees temporarily move into another office where they can work safely. If the employees still have to go to the Zakkaai, they will do so with the necessary reinforcements.

In the meantime, an investigation by the court is underway and a procedure has been started to evict the tenant and the squatters from the building, ‘but that could take months’, our source knows.

Green is counting on the reopening of Den Dok

EXPERIENCES ABOUT THE ORCHILDREN’S PAST AS A DISCUSSION

EXPERIENCES ABOUT THE ORCHILDREN'S PAST AS A DISCUSSION