Deputation continues to grant permits despite opposition in Kluisbergen

In the first week of November, the permit for a large stable in Meerse was annulled in court for the seventh time (!) It is yet another step in an endless licensing carousel. The first permit application for the stable in Meerse to the west of the Reytgracht was submitted in 2013. Milieufront Omer Wattez vzw (MOW) did not agree and already protested. Nevertheless, the owner already started building the stable in 2015 and subsequently submitted new permit applications. Without result for the applicant, because they were rejected one by one.

MOW has argued from the start that a large barn does not belong in open space in the Scheldt valley. In addition, the site is located in a flood-prone area. The stable therefore disrupts the landscape, gets rid of the scarce open space that still exists and also creates unnecessary paving. By starting construction of the barn while the permit was still being processed, the applicant was taking a risk. What if the permit is destroyed? However, each time the permit was destroyed, a new application was submitted.

In 2013, the applicant applied for a first urban development permit. The municipality refused, but the applicant went to the East Flemish deputation, which issued them. MOW went to the Council for Permit Disputes (RvVb), which annulled the permit for the first time in 2015.

In 2014, the applicant already applied for a new urban development permit. This time, both the municipality and the Deputation granted it, despite opposition from MOW. MOW then went to the RvVb, which annulled it a second time in 2017. The deputation then had to make a new decision and issued a new permit in 2017. Incomprehensible. MOW then appealed again to the RvVB, which annulled the permit for a third time in 2019.

An environmental permit was also applied for in 2014. That is why local residents went to the Council of State (RvS), which annulled the permit for the fourth time in 2019. The deputation did not accept the judgment of the RvS and issued an environmental permit again in 2019. However, this decision was made via an accelerated procedure. destroyed for a fifth time by the RvS in 2019.

Despite the various judgments of the RvVb and the RvS making it clear that a large barn does not belong in the open Scheldt valley, an environmental permit was applied for in 2019. The municipality granted the permit. MOW appealed, but again the deputation granted the permit. MOW then went to the RvVb, which annulled the permit for a sixth time in 2021. The Deputation had to make a new decision, and you guessed it… it granted another permit in 2021 and MOW had to knock on the door of the RvVb again. In the first week of November, we received the verdict: this nullifies the 2021 deputation’s license for a seventh time. And now the deputation has to make another decision. 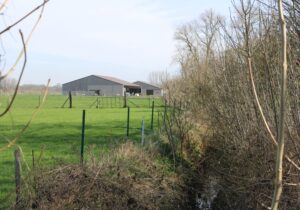