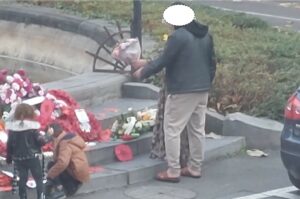 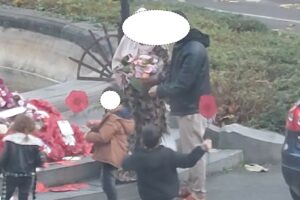 Geraardsbergen. According to annual tradition, the commemoration of the Armistice was organized on Friday 11 November. Flowers and wreaths were laid at the war memorial on the station square. After the commemoration, a woman and a man took the opportunity to take a bouquet of flowers with them. A witness forwarded photos to the police. Stéphan Bourlau (The Alternative) reacts incensed.

According to annual tradition, the commemoration of the Armistice was organized on Friday 11 November. After the mass in St. Bartholomew’s Church on the Markt, a procession left for the war memorial on Stationsplein, where the wreath-laying ceremony was organised. Groups and stakeholders also laid flowers. Children got the chance to take paper poppies with them.

Around four in the afternoon, a family took advantage of the situation to take a bouquet of flowers that had been placed there. A witness took pictures of the incident and forwarded them. It clearly shows how a man and a woman chose a bouquet. The woman continues with the flowers.

Stéphan Bourlau (The Alternative) is indignant: ‘This shows a lack of respect for a moment to commemorate a dramatic event that caused millions of deaths and determined the course of the history of the twentieth century.’ It is clear to the municipal councilor that there is either something wrong with the standard awareness that such a thing is not possible or that those involved are not aware of the commemoration moment. But on the latter, Stéphan Bourlau is less convinced: ‘All over the world flowers and wreaths are laid to commemorate important historical events. I cannot imagine that those involved did not feel that such action is illegal. It is certainly not a good example for the children.’

The witness reported the incident to the police. It is not yet clear whether there will be an investigation. Stéphan Bourlau hopes that the incident will be cleared up quickly and that the flowers will end up where they belong: at the war memorial on Stationsplein.’

Ceremony and festivities in honor of November 11 in Hemelvedegem.