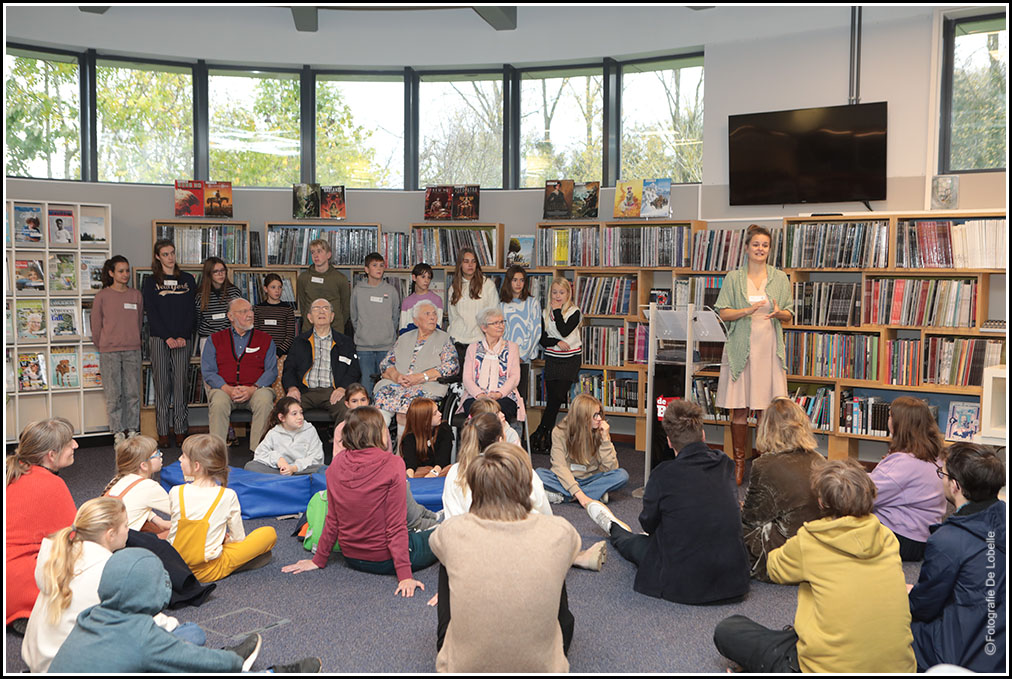 ‘At thee with Meemee’ is the absolutely wonderful project by Helena De Muynck from Gijzenzele. On Saturday 5 November, the official starting signal was given in the library of Scheldewindeke On the tea with Meemee. Helena, an Information Management student and intern at the Scheldewindeke library, presented her project ‘Op de Thee met Meemee’ with great enthusiasm and verve. Afterwards everyone agreed, this is worth repeating. ‘On the Tea with Meemee’ was a great success. There was a lot of praise for the beautiful heart-warming initiative. A very happy Helena sees her dream come true. ‘Connecting younger and older generations through language.’ Children and seniors who read and tell each other stories, strengthen the bonds between generations, take seniors out of their isolation, isn’t it beautiful. Increasing social cohesion. She hopes that her project will be copied in many libraries. She can be proud of her project. The project is brimming with good intentions.

Helena De Muynck: ‘A 60 pairs of listening ears learned how the project took shape, which partners were collaborated with, why the project was set up, what the advantages are, how best to approach if you want to participate yourself and where you can contact for more information. The over-80s who were willing to play a role model and thus show the concept and the consequences live, were able to take a seat in a cozy seat after the foreword. Jenny & Suzanne (WZC De Zilverlinde), Roger (Gijzenzele) not If (Balegem) were each accompanied by 4 young people between the ages of 10 and 18 who sat down in front of them. The kids read from a book that intern Helena had selected, after consultation with the seniors and tailored to the reading level of the coupled young people. In this way, the elderly could not only experience the amazement of a good book again, but they also had fun lights in their eyes due to the presence of all that youthful energy. 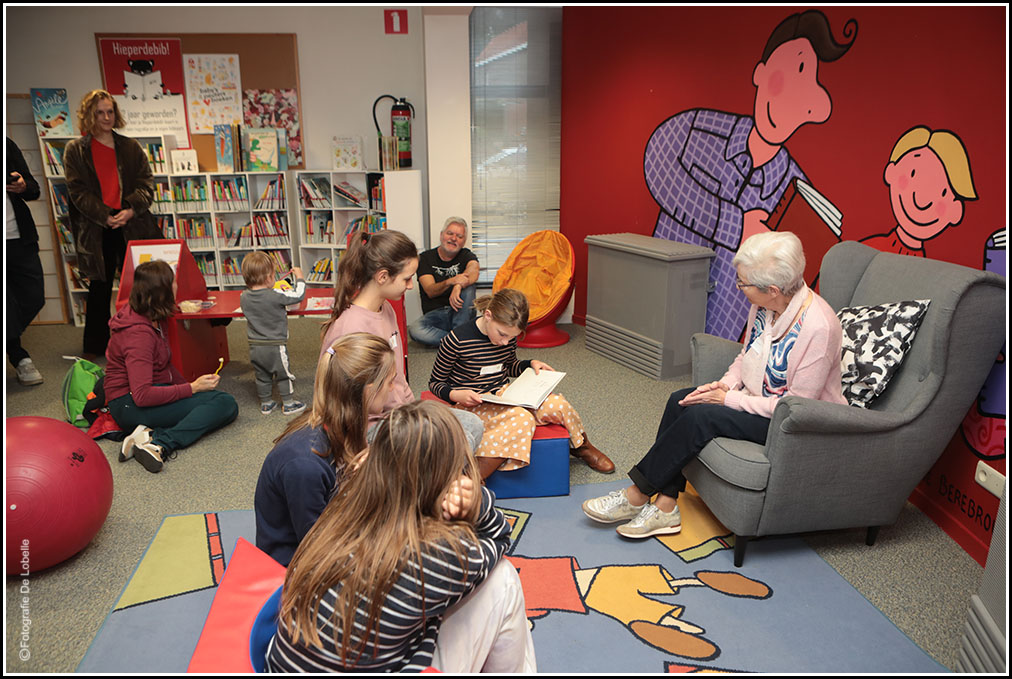 The reading sessions were followed by a break during which some tasty delicacies from Small happiness from the Moortelbosstraat, waters of Ginstbergjuices, coffee and – of course – tea from Oxfam World Shop Scheldewindeke were appreciated. After the break, the seniors returned arm in arm with ‘their’ children and the roles were reversed and they were allowed to climb the virtual stage. They passionately told stories about their youth, what a school day was like, how they experienced the war as children, about the captivity of war, how a spinning mill works and so on. The children crawled closer, asked questions and listened with genuine interest to all those valuable experiences that were new to them. Occasional bursts of laughter erupted from the teenage corner as Roger leisurely recounted anecdotes from his time as a shop detective at the Makro. 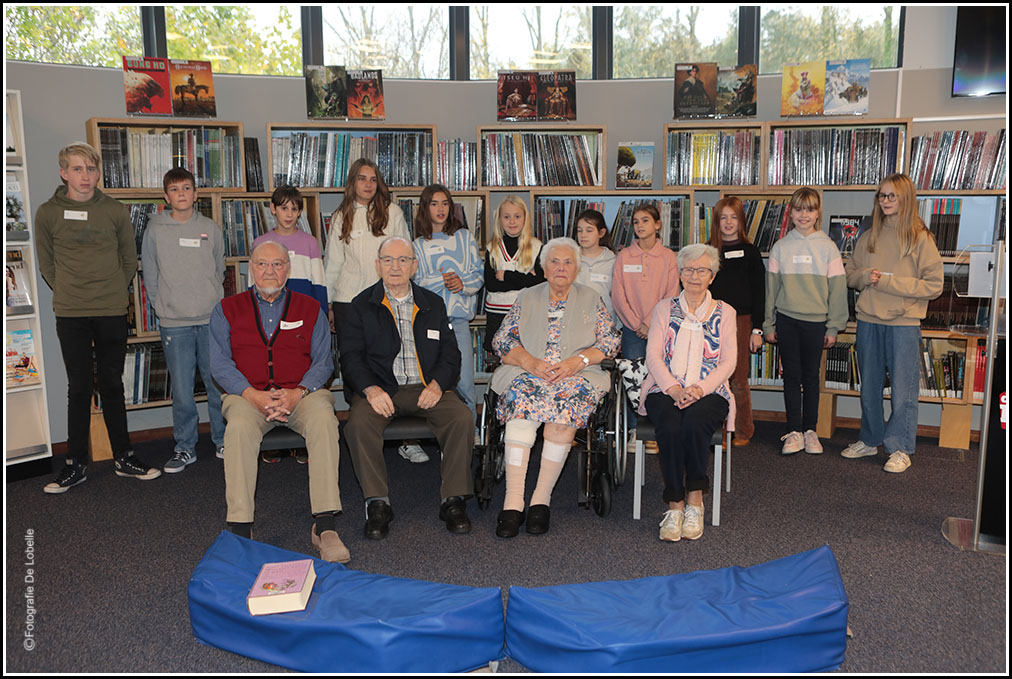 The end was foreseen at 5 pm, but some were unstoppable! Wild plans were already being made in various groups for a repetition at home or in the retirement home, and most immediately took forms with them with which they could sign up to read or tell the story themselves. Helena spoke in her foreword about the dream she had, the dream of reconnecting people – through language – and at the same time doing something against the loneliness that has been creeping into our society – certainly since the pandemic. The many happy faces, compliments and thanks afterwards showed that there is a good basis for achieving this.

So now it’s up to you: do you also form a fist against loneliness? Are you also going for more connection in our municipality? Will you make Helena’s dream come true? Then hurry to the library to sign up and a Thee-date to arrange, or surf directly to https://oosterzele.bibliotheek.be/op-de-thee-met-meemee where you will find all the information. Together we create a better world! Because small things count too!’ ‘The head is off, now it’s up to you’. (Helena De Muynck, mvdv, photos ddl) 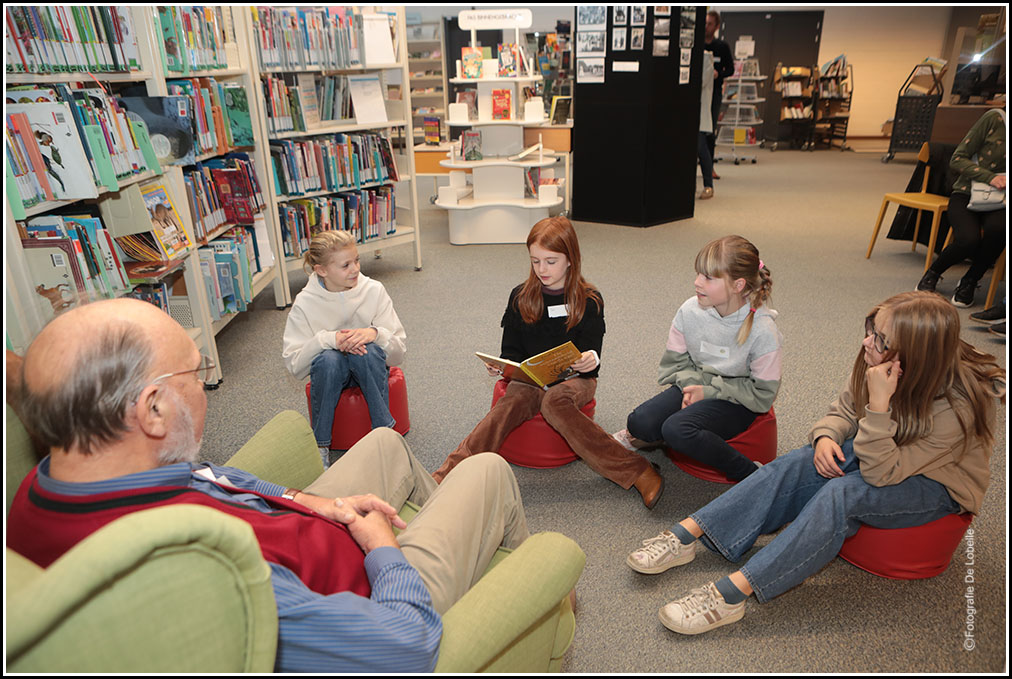 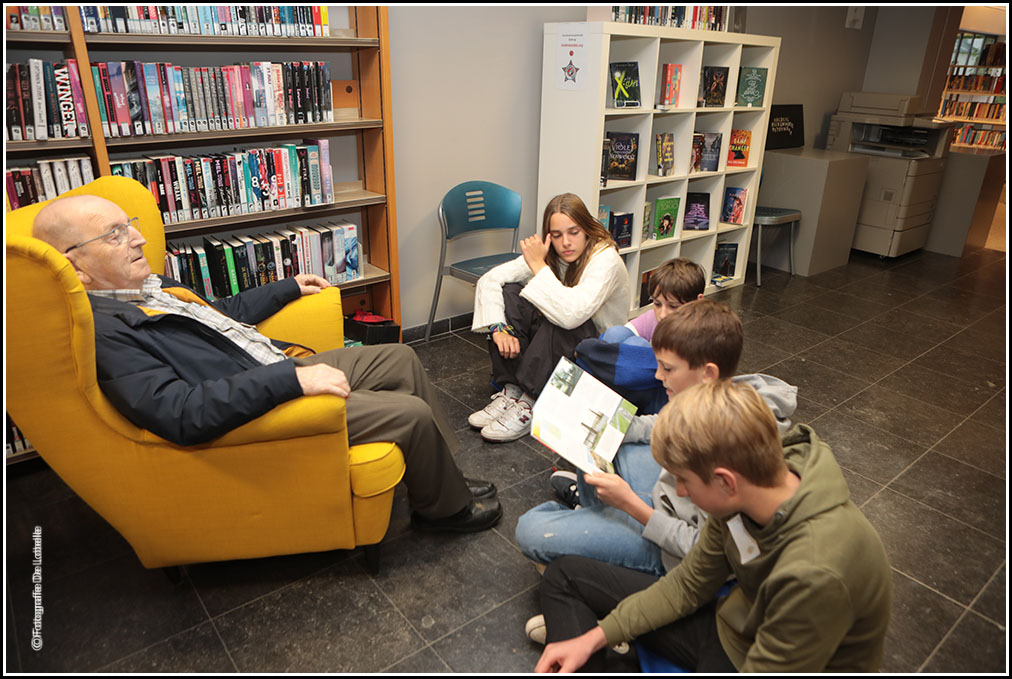 “It’s a shame that the entire old city center is turning into a public landfill.”