At the beginning of 2021, the Municipality of Brakel teamed up with the Province of East Flanders in the context of the ERDF project ‘Onderneem Er Op Uit’. Together they have strengthened the municipal services towards local entrepreneurs. This is how the Sunday market came into being and training evenings for entrepreneurs were held. Despite the positive cooperation, an extension of the provincial guidance in 2023 is not possible for budgetary reasons.

In concrete terms, Peter Ameel (local economy expert of the Province) came to Brakel every fortnight for consultation with Kimberley Vanlierde (municipal contact point for local economy) and market leader Joris Bakkaus. Texts were adapted or drafted on the basis of those discussions. For example, the market regulations (regulations on itinerant trade) were revised and Brakel now also has its Sunday food market, in addition to the weekly market on Wednesday. The Fair Rules have also been updated. Design texts were drawn up for other themes (such as food trucks).

But there were also activities with provincial support. Such as the Market Square that became a ‘Catering Square’ for a day in August 2021. Or the training evening for entrepreneurs on how to attract and retain staff. Or retail specialist Katlijn Voordeckers as a speaker at the Middle Class Congress, where those present also received her book “Vermerkteken”, donated by the municipal council.

The vacancy was inventoried and active mediation was done to find a new use for an empty building. The ‘doing business’ section on the municipal website is now a lot more informative. And assistance was provided in the preparation of grant applications.

Since last year, newly started entrepreneurs receive a guide letter from the municipality (with information about the point of contact at the municipality, the gift voucher, the trade council, and so on).

Quite a good result for Brakel. Despite corona, economic policy has received extra support, partly thanks to the support of the province.

A digital gift voucher is being considered for next year (in addition to the current paper version). The first preparations for this have already been made. And at the request of the Small Business Council, a subsidy application was recently submitted for a digital trade guide, to raise awareness of our self-employed people and to encourage local purchasing.

However, an extension of the provincial guidance in 2023 is not possible for budgetary reasons. But we can look back on a good cooperation between the province and municipality. It is a good example of the guiding and supporting role that the Province of East Flanders plays towards its municipalities.

For a minimal contribution, the services of the smaller municipalities were brought to a level that you would rather expect in larger municipalities. With good results for Brakel and its entrepreneurs. 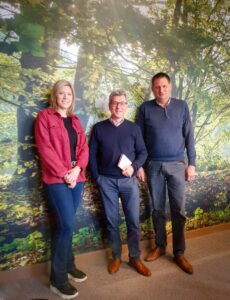 Brent Schuddinck gives VGO another point in the final phase