“He put a gun to our heads and pulled the trigger…”

Geraardsbergen/Lessen. Elsje wrote a horrifying, compelling and oppressive book about her youth. For years, Elsje, her brother and mother were at the mercy of their sadistic, ruthless and narcissistic father and husband, who were only out to satisfy his primary lusts. He went to great lengths for this. Rape, abuse, exploitation, humiliation, torture and incessant mental and physical violence were the order of the day.

Elsje (54) is married and has two children. She currently lives in Lessines, but grew up in Everbeek and worked in the kitchen of ‘the match factory’ in Geraardsbergen in her youth. Elsje wants to come out with her story and make it clear to the world what incest, sexual, physical and mental terror does to a family. Her therapist advised her to write a book about her past as a coping process. 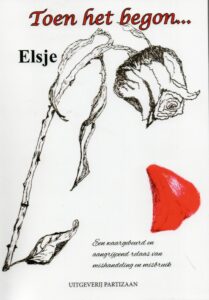 With this book she wants to make it clear to those around her why she is so withdrawn and reacts differently than what people expect. ‘After everything I’ve been through, I think it’s quite an achievement that I’m still here, that I was able to make something of my life,’ Elsje testifies. Her brother and mother are still in denial. They act as if nothing happened,’ adds her husband. With her book, Elsje wants to make family violence a subject of discussion and hopes to help victims. ‘The most horrible things happen behind closed doors, without the outside world knowing about it.’ Now that her father is dead, she wants to come out with her story.

The book is certainly not finished. It is a rough, unpolished account, a first listing of the experiences she can remember, which have not been forgotten or repressed. Elsje writes down the events as they happened, frank, confrontational and uncensored. The book is a process of many years. Elsje can go public with her story because she is so well supported by her loved ones. Through the years of misery, she also had warm moments with her family. ‘My family knew something was going on, but it was so bad… My family is currently reading the book. The account hits like a sledgehammer.’

Morbid sense of superiority
Elsje was only eight when she was abused by her father and had a gun barrel pressed against her temple with the message to shut up. For years Elsje, her brother and mother had to endure agony and deep humiliations. Until they were finally reduced to objects to satisfy the morbid lusts, passions and desires of their father, her husband.

Whoever reads the book – an uncensored and unpolished summary of brutal and heartbreaking experiences – is left orphaned with many questions, but above all with a lot of impotent anger and pain. I had to put the book aside several times to recover from the years of agony these people had to endure. It drew the family members. Her mother became addicted to alcohol. Several times Elsje and her mother thought to end their lives.

Elsje’s mother grew up in a hardworking family with eleven children in Overboelare. Her brothers and sisters look back on a happy period, which gave them a lot of guidance in life. Her father worked in construction. Mother had been working in ‘the match factory’ since she was 14 years old. At an early age she met her future husband. He had the charm and charisma to win people’s trust, but things soon went wrong. When her father was alone with the sister of his future, he took the opportunity to put his arm over her shoulder. “She was very angry… but he minimized his actions,” writes Elsje.

The early marital bliss soon shows cracks
It comes to a rift between the two, but her mother is quickly persuaded to continue with the relationship. Elsje’s mother and father married at a young age and lived in a terraced house in Overboelare. Hair 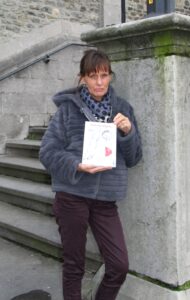 mother still worked in the match factory. Father was a professional soldier. The honeymoon was barely over when the early marital bliss already showed cracks. The match factory didn’t pay badly, so her mother earned a little more. He didn’t like that. ‘His morbid sense of superiority’ took over. “A man should earn more.” He wanted to go to Germany, where he would receive a higher salary as a soldier.

When her mother made it clear that she did not want to leave her home and that she was quite happy with her job, she only received some serious blows. The spell was broken. The slightest stimulus in his fickle mood prompted him to physically assault his wife. He tyrannized her. Determined her life and always found a reason to make it brutally clear to her who was boss. She had to submit completely while he took the liberty of seducing other women. Far from her family, her will was broken, her personality demolished, and her confidence shattered, as he reveled in his power. There was no question of empathy and basic humanity. Her mother was at the mercy of his morbid whims, his conceit, narcissism and fluctuating emotions.

His resentment, hatred and jealousy blew his fuses. When she was pregnant, he was angry because he wanted to have a son instead. She was punched and kicked in the stomach. He also thought the child belonged to another man. She was hung upside down from a window until she confessed. But she didn’t. No matter how bestially he railed against his wife, ‘to the outside world he showed himself differently, he put on a mask. The people he associated with thought he was a nice guy,’ writes Elsje.

Jail
The book is a succession of brutal violence, while the family and friends suspect nothing. Elsje’s father was clever. He beat his wife black and blue, but not in visible places. Only in 2017 did Elsje and her mother find the strength to file a complaint with the police, but the facts were time-barred and there was a lack of evidence. Why didn’t they go to the police sooner and didn’t they inform family members earlier. Why have they not had the numerous injuries diagnosed by a doctor?

“We were tyrannized and subjected to the worst humiliations and brutal violence. He kept hitting us so hard until we said several times that we would definitely shut up. He put a gun to our head and pulled the trigger,’ says Elsje. “Don’t be under any illusions to run away, I’ll find you and you’ll die instantly,” he told them.

Her father was a man of twelve crafts and thirteen accidents. He lived in different places and eventually ended up in Everbeek with his family. The times he beat, stomped, sexually abused, raped and humiliated his wife and daughter are innumerable. He exploited them to work for him until they dropped. Elsje had to finish school. He raped and beat his wife relentlessly while the children watched. As a child, Elsje heard how her mother was sexually tortured and saw how her father abused her brother. The torments continued incessantly and drove Elsje and her mother to the edge of the abyss.

‘He smoked alcohol illegally for a while and even sold drugs. To smuggle the drugs through customs, he tied them around my six-year-old brother’s body under his clothes. Until one day the police caught him’, Elsje testifies. Her father flew into prison for several months. His absence brought peace and happiness to the family until he was released. It went on like this for years, until her father met another woman. ‘Despite his criminal past, her father joined the White March through Brussels on October 20. You just have to dare.’

processing process
Elsje met her current husband at a young age, with whom she has two children. The torments, the fears, the psychosomatic complaints and the tantrums eventually drove Elsje to the psychologist. Her body has been badly damaged by the many abuses and slave labor. She is scarred, but lucky to be well surrounded by her family.

Her book ‘When it began…’ is a processing of the past. Burdened with trauma, she has been able to conceal the many humiliations of the past. But the feeling of injustice continued to gnaw, also because the outside world had such a good image of her father. ‘Many acquaintances came to tell me that I was lucky to have such a good father,’ writes Elsje. Years later she decides to write a book about it, to make it clear to those around her what a monster her father was. She cannot name him as her father. Elsje prefers not to use her family name.

Later Elsje notices that she is creative and enterprising. Among other things, she will act and get a diploma to teach. She started teaching, but the many physical and psychological torments continue to plague her and her family. “I often had fits of anger and anxiety. I hit everything, shouted at everyone… Then everything that had happened in my past came up.’ Many treatments later, Elsje is doing better. Her father has died. Processing is in progress.

What can you do? Who can help you?
If you are confronted with family violence, you can call 101 in an emergency. Talk to family and friends about it and file a report with the police. If you are a victim of family violence, you can call 1712 or chat or email via www.1712.be. The employees of 1712 listen to your story and, if necessary, refer you to appropriate assistance. For more information: https://www.slachtofferzorg.be/familiaal-geweld

‘When it started…’ is a book by Elsje published by Uitgeverij Partizaan and can be ordered from Elsje via Facebook page https://www.facebook.com/elsje.mertens.1or at publisher Partizaanhttps://www.partizaan.be. The book costs €18 or €21.20 including shipping costs.

Zottegem town hall finally out of the scaffolding

Even more activities around Sinterklaas in Zottegem

Even more activities around Sinterklaas in Zottegem