Visibility and safety go hand in hand in traffic 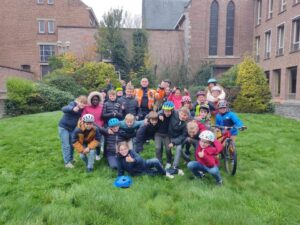 Geraardsbergen/Lierde. On dark days and rainy weather, standing out in traffic and decent bicycle lighting is not an unnecessary luxury! Unfortunately, many pedestrians and cyclists still take to the road without visible clothing or lighting! Young walkers/cyclists in particular often misjudge their own visibility. They endanger themselves and others! Police Geraardsbergen/Lierde visited many fifth graders last week to make them aware of this.

Visibility and safe traffic go hand in hand! Local Police Geraardsbergen/Lierde will resolutely focus on ‘seeing and being seen in traffic’ during the month of November! A project that is offered to all fifth graders of the schools in the territory of the police zone. The project includes a theoretical part and a bicycle check and is taught by an inspector from the Traffic Department.

A lot of interest
In the month of October, all primary schools were approached by the police and asked if they wished to participate in the project. The interest was great: no less than 8 different schools from Geraardsbergen and Lierde signed up. Good for 11 classes and 230 fifth grade students.

Inspector Bart becomes Master Bart
Inspector Bart of the traffic service at the Geraardsbergen/Lierde police became ‘master Bart’ for a while. With a nice interactive presentation tailored to the children, a lot of fluorescent and reflective material and a handy bicycle control card in his pocket, he has now visited almost all participating schools. In total, about 200 bicycles were checked and students were given tips and recommendations for a full hour of lessons to be safer/more visible from now on.

“Learned young is old and well done! Primary school pupils very often come to school on foot or by bicycle. They don’t always think about the dangers they may encounter along the way. I make them realize that it is difficult to notice them in traffic without striking clothing. I also teach them how to make themselves visible both during the day and in the dark, how to wear a bicycle helmet correctly and what the function of bicycle lights is.” says Bart.

Shared responsibility
Although the police take many initiatives regarding visibility and road safety, they also want to emphasize that everything starts with everyone’s own behavior in traffic. “Road safety is everyone’s responsibility. As police, we cannot fulfill this task alone. That is why we also appeal to (grand)parents. Teach your (grand)children the importance of safe road behavior and do not forget to set a good example yourself.” it reads.