The scooter – what an invention?

The scooter remains a dangerous means of transport, especially in the context of other players in traffic. The accident statistics can be called bad and you can’t solve this by introducing zones 30 everywhere and hanging hundreds of cameras.

After all, the new cars are equipped with sophisticated radar and camera systems to ensure that they are not the source of a great deal of human suffering. The use of scooters that are barely lit remain dangerous and give doctors and physiotherapists job security for years to come. We hear this from people in the medical world. They are not only a major hazard between car and bicycle traffic. They also cause a major parking problem – see this week’s Brussels photo!

We read from a message on VRT NWS earlier this year

The number of injury accidents involving electric scooters is increasing sharply, doctors warn. Last year, an average of three accidents per day occurred with such an e-step and that is probably a major underestimate. Moreover, the injuries are often serious. “We see facial traumas that surgeons have to work on to make the patient look a bit like the photo on his identity card,” says emergency physician Kevin Vereecken (ZNA). “I was very lucky, it could have been worse”, Roel and Dominiky testify in “Terzake”. 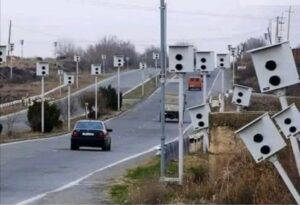 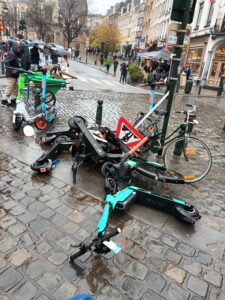 VIDEO: Record cake in honor of 500 years of Lamoraal Egmont