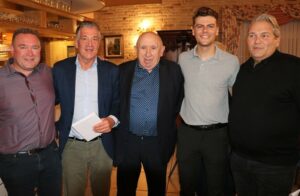 Geraardsbergen/Deftinge. On Saturday, November 19, the supporters club organized a support ball for the second time in a sold-out room for professional cyclist Arne Marit in Deftinge. As per tradition, there was a panel discussion on the program with senior citizens among the team leaders Hilaire Van der Schueren, ex-pro Ferdi Van den Haute, ex-pro and team leader Laurenzo Lapage and bicycle repairman Ludwig D’Hose.

After a year full of bad luck for Arne, including seven falls in one month, he won two victories, including the Closing Prize in Putte Kappelen. Arne leaves the Belgian cycling team Sport Vlaanderen Baloise after two years and makes the switch to the World Team Intermarchè Wanty Goubert with Hilaire Van der Schueren and Laurenzo Lapage as team leaders.

On December 5, Arne will leave for Spain with his new team on an internship. In the spring he will start in Paris Nice where his fast legs are counted on in the first four stages. Cycling fans can follow Arne’s performance via his FB fan page and his site www.arnemarit.be. The supporters room is located in café ‘t Kelderken in Lierde.