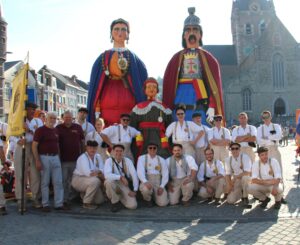 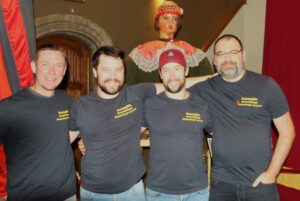 Geraardsbergen. Stijn (27), Hendrik (37), Jonas (29) and Jan (44) have literally and figuratively put their shoulders under the giants of Geraardsbergen since last year. They are currently undergoing a trial. If they succeed, they will be included as full-fledged giant carriers of Geraardsbergen. I meet the four young powerhouses in a pub on the Stationsplein. The motivation and commitment is splashing off their faces. We want to keep the tradition in Geraardsbergen alive and are very proud to be able to carry the giants. 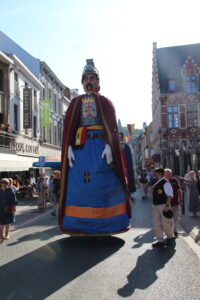 Stijn (27), Hendrik (37), Jonas (29) and Jan (44) have been carrying the giants of Geraardsbergen since last year. They can become full-fledged giant carriers, but they have to go through a two-week trial to do so. ‘If you want to become a full member of the Geraardsberg Giants’ Guild, you first have to do a trial. We have received several assignments in the last two weeks. If we pass the tests, then we are full members. The last assignment is that we get in the press.’

Looking for extra powers
Why is such a test necessary? ‘You should not underestimate how difficult and difficult it is to carry such a colossus. A giant is carried by one person. Such a giant is quite heavy. Moreover, you must be able to maneuver and perform dances with it. It is no easy feat to balance such a giant. It not only requires practice, but also dexterity. Moreover, our giants literally catch a lot of wind. A short, strong gust of wind can knock you and the giant off balance. Such a test is not only tradition, but the guild must be sure that you can handle the assignment,’ explains Jonas. ‘In any case, we must avoid hitting the ground with a giant,’ Jan adds.

“Why don’t you put the giants on wheels or roller skates?” “We are much too proud for that. We also want to respect tradition. It commands that giants must be carried,’ Jan adds.

The Giants Guild consists of about thirty members. That is not that much. The guild could use more people. ‘Not only are enough people needed to carry the giants. They must alternate, but there must also be enough people present to guarantee safety. Not everyone always comes along when there is an activity. The guild is therefore looking for extra porters,’ says Hendrik. ‘Moreover, you should know that these giants are taken apart and put away, because such a giant takes up a lot of space. The transport, construction and dressing of the giants requires a lot of work and coordination,’ adds Stijn. 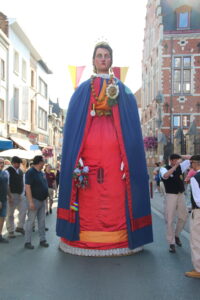 Why did our ancestors plan to build a giant? ‘Giants were not only made in Geraardsbergen. Other cities – such as Ath – also had giants. Such a giant impresses. Perhaps the intention was to impress the enemy and give them a sense of security. Who knows?’ Jonas says.

In the city account of 1577, a giant named Goliath is mentioned for the first time in Geraardsbergen. A new robe was made for giant Goliath. Presumably Goliath must have been older. Other records indicate that there must have been only one giant. It was not until the early nineteenth century that three giants were mentioned: giant Goliath with his wife and child. It is suspected that his wife and child are a lot older than indicated. Over the years, the giants were restored several times and provided with new clothing.

In 1977, the giants once again received new clothing and a basket maker repaired the wickerwork. In 2002, Goliath and Gerarda were blown to the ground by a violent gust of wind. Their heads were restored by the city services.

The giants were always carried by bag bearers. The guild of the bag bearers was a closed craft for more than two hundred years. It belonged to folklore that only sackcloth bearers were allowed to carry the giants. Candidate bag bearers had to pass a test to prove they were capable of carrying a giant. They had to carry a very heavy bag up the Oudenberg and back. 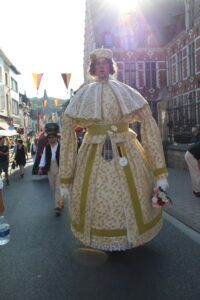 Interested
When the guild was given up, the job was done by the police and later city staff. This later resulted in a new group of carriers that grew into a close-knit group of friends. On October 29, 1988, the Geraardsbergse Giants Guild was officially founded. The giants were refurbished and a Giant Song was composed. In 2016, the giant bearers were given a historically sound costume. This should not only give the giant carriers more style, but also color and character.

Anyone interested in becoming a carrier can report to the Giant’s Guild. A good condition and some muscle strength is essential. Giant Goliath measures 4.75 meters and weighs 122 kg. Gerda is 4.16 meters tall and weighs 98 kg. Kinneke Baba is still 2.5 meters tall and still weighs 60 kg.

Are you one of the top ten football connoisseurs of Zottegem?

Are you one of the top ten football connoisseurs of Zottegem?