Yesterday there was a large turnout for the first game of the Red Devils in the Zwalmparel in Munkzwalm. The room was quite full, says mayor Bruno Tuybens, who was also present. “The municipality of Zwalm provides logistical support and has adapted the hall regulations for the World Cup. This means that the organization from café Ysebaert could already record the possible dates for the matches after the group stage, because it is not yet possible to say when the Red Devils will play. That of course depends on the ranking. The local police came to have a look and saw that everything went well. On to the next match this Sunday against Morocco.” 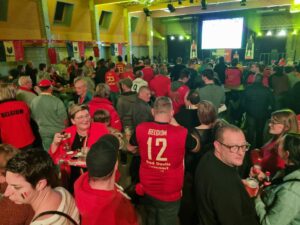