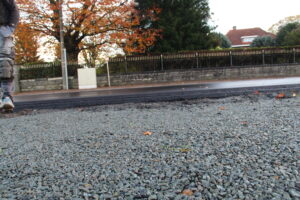 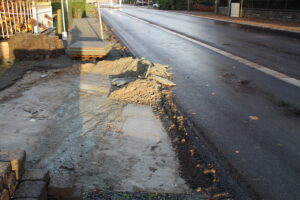 Smeerebbe-Vloerzegem. For Kristof Van Den Abbeele and his girlfriend Katrien Ritserveldt, the rebuilt Aalstsesteenweg is half a nightmare. ‘The reconstructed Aalstsesteenweg contains construction errors that will cause problems,’ says Kristof Van Den Abbeele. Kristof contacted Stadsbader – the company that carried out the works – to look for a solution, but he says he encountered a wall of indifference. The company declined to comment.

This week, the Agency for Roads and Traffic announced the news that Aalstsesteenweg will reopen to all traffic on Friday 25 November. But whether this is good news for everyone is highly doubtful. Kristof Van Den Abbeele and his girlfriend Katrien Ritserveldt can hardly handle their disappointment.

Katrien lives on the redeveloped part of the Aalstsesteenweg in Smeerebbe-Vloerzegem. Kristof complains that the new cycle path is considerably higher at various homes than before. “When it rains, the water will no longer drain to the street, but to my girlfriend’s house,” says Kristof. “Given that the intensity of the showers has increased in recent years, this can lead to serious problems.” 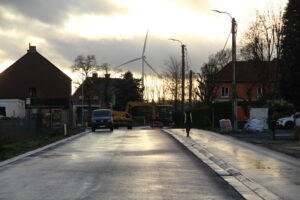 Road surface is twenty centimeters too high
Kristof installs terraces and driveways, among other things, and speaks with expertise. ‘If you look closely at the road, you will see that the newly built track is a lot higher than before. It is clear that a serious mistake was made during the measurement,’ Kristof notes. The difference in level is significant. My neighbour’s bike path is more than twenty centimeters too high’, Kristof continues.

Kristof has already made several attempts to settle the matter among themselves, but he says he has encountered a wall of indifference. ‘I was heard by various employees on the site, but several responsible persons at Stadsbader showed no understanding or sent me with a lump in the reeds. I even suggested rebuilding my girlfriend’s driveway to eliminate the difference in level. I would then pay for the bricks, while the road works company would build the driveway. That seems more than a fair deal to me’, says Kristof. ‘But the company doesn’t listen to that either.’

As an interim solution, the road works company wants to install a drainage gutter at the level of the driveway, but according to Kristof this is only half a solution. ‘I want a sustainable solution: either the bike path will be reconstructed or my girlfriend’s driveway will be reconstructed. If those responsible have some common sense, they know what to choose.’ Kristof Van Den Abbeele and his girlfriend Katrien Ritserveldt do not want to stop there and have hired a lawyer. The law firm already wrote a letter to Stadsbader proposing an amicable solution, but without result.

We asked Mr. Lucas Verspecht of Stadsbader for a response, but he clearly stated: ‘No comment’.

Burchtsite Herzele will be transformed into MFL land

Week of the seniors in Zwalm

Week of the seniors in Zwalm